Hard to believe it is the end of November

I haven’t written in a while – it has been a busy week!  On Sunday we went to San Jose to complete what we needed to do to submit our application for residency.  We headed out on Sunday and ended up having to reverse direction and go another way because the highway we were on had a bad landslide.  We were only 50 kilometers from San Jose when we had to backtrack.  I have to say that I am glad we did – even though it took a couple of more hours.  The drive on highway 10 was gorgeous, even though it was raining like crazy the entire way.  We had only been on that highway once before right after we started visiting Costa Rica and we were traveling on it very early in the morning on our way to raft the Pacuare river.  So – I didn’t remember it at all.  The towns along the way were all so nice and we the roads were very good.  We went through many, many coffee plantations and we also drove by The Tropical Agricultural Research and higher Education Center (CATIE) just outside of Turrialba.  The University of Idaho (and most of the other land grant institutions) had many joint programs for research and graduate students with CATIE but I had not seen it before.  Next time we will stop. 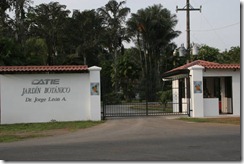 We arrived in San Jose in the early evening, checked into a nice hotel and then went to dinner at a wonderful Chinese restaurant.  It turned out that one of our waiters was from Cahuita (just up the road for Puerto Viejo) and he thought it was neat that we were living in PV.  The food was very good but a bit odd in that sliced potatoes were served over rice in my chicken curry dish.  The next morning we headed out to the U.S. embassy to pick up a letter from the embassy that verified that Tom would be receiving a social security check beginning December 15th.  We needed that to prove that we had enough income (over $1,000 per month) to qualify for residency.  It all went very smoothly and we were in and out in thirty minutes.  I didn’t take the camera because we were told that we would not be able to take pictures but I should have – I could have taken some of the building and it was really nice.  After getting the letter we headed over to ARCR (Associated Residents of Costa Rica) who will be handling the residency application for us and we were taken to the National Police Station to have our fingerprints taken.  Even though we had prints taken in Idaho which were certified by both the state of Idaho and the Costa Rican embassy in Washington D.C., we still had to do it again to make sure we weren’t wanted in Costa Rica.  That process took about an hour and then we were done!!!  We headed back to ARCR and met with our attorney who finished up the application.  We should get our application number in about two weeks.

We headed back to Puerto Viejo on Tuesday morning in a deluge.

We came back on highway 10 since it was so bad and, even though there was not another landslide on highway 32, I’m glad we did.  It is just less stressful on that highway.  We got into PV around noon and have been hanging out.  The weather has been beautiful until today.  It started raining around 10:00 but we were able to go to the farmer’s market and pick up two huge bags of fruit and vegetables.  We are starting a five day juice fast and what better way to begin than with the fresh stuff

Several people have suggested that we do the fast to see if it will help Tom’s hands heal and I am thinking that it can only be good for me too.  I got a juicer at a store here and it was a pretty good deal for here – about $100.  Most electronics are substantially more than what we can get them for in the states.

Thursday we had Thanksgiving dinner with our wonderful neighbors.  Since turkeys are so expensive here we went with blackened chicken on the grill and it was yummy.  I made a carrot and cucumber marinade for salad and we cooked up potatoes.  The neighbors brought excellent cheesecake, wine, and gravy for the potatoes.  It was GREAT!!!  They are heading back to Portland for a month or so on Tuesday and we will miss them.  I did get a photograph of the turkeys who live across the road but they are the closest we came to turkey for dinner………… 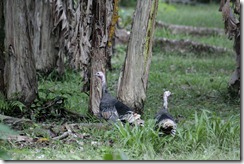 Here are a few pictures from our trip to San Jose.

Heading out of town

Cemetery – they are so beautiful

It is Christmas time in San Jose!