Is This the Rainforest? 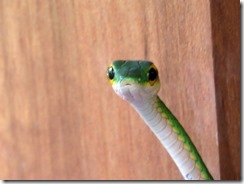 It has been quite a while since I wrote – about two months.  The main topic of conversation around here during that time was the terrible drought that had been going on since July.  Water wells were drying up and those places that were serviced by the city water had to ration – most areas could only use water two hours every other day.  We were lucky because our well is quite deep and we continued to be able to have water every day, although we did conserve. 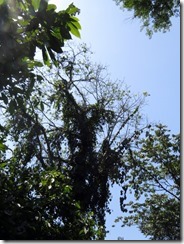 This is one of the huge trees near our yard that shows the effect of the lack of rain.  Rain forests don’t do too well without water.  The good news is that we finally started getting rain a couple of weeks ago and last night we had over five inches.  Everyone is breathing a big sigh of relief.

For us the most important topic of conversation has been Kaya’s knee surgery.  She has been limping for several months off and on and a few weeks ago when Tom took her to the beach she did something to it and could no longer put any weight on her back leg at all.  Our vet here recommended a specialist in San Jose to repair what turned out to be a torn ACL. 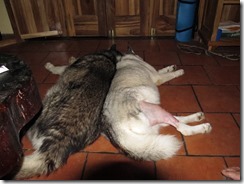 Things went okay until a couple of days after she got back.  The stitches came out and the wound was gaping.  We called our vets here in town on the Saturday before Easter and they came over and fixed her right up.  It actually was pretty hysterical.

They put her on the table in our outdoor living room, gave her an anesthetic to put her to sleep and then completely redid all the stitches and cleaned it up.  Tom got to hold the flashlight so was a surgical assistant

It will be several weeks before she is able to get back to running around but she is already so much better – she doesn’t even mind Wiley laying his head on her. 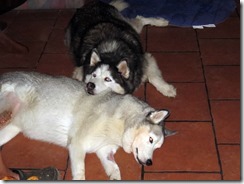 And I have to add that the entire cost was 1/10th of what it was when we had the same surgery done on our Alaskan Malamute when we were living in Idaho.  Pretty interesting.  I absolutely love these veterinarians here!!  Excellent care for a very reasonable price.

We did have a couple of sets of visitors in March which was nice.  We haven’t had many at all this year so it was good to see friends and family from the states. 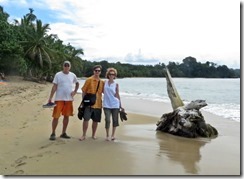 Clive and Lori, our friends from DC came at the beginning of the month for their third visit and my cousin Rich and girlfriend Candace

came at the end of the month for his second visit.  It was such fun to see all of them even though I had to work and we didn’t get to spend as much time with them as in the past.  Still fun to catch up and spend time together.

We have had lots of wildlife visitors too – right in our yard the last couple of weeks.  Two snakes, both harmless but really long – a green vine snake

that wanted to go into the bedroom and hang out with Wiley, and a bird eating snake that was huge!!

A brown wood turtle – that was completely unexpected!!  We have no idea how it got here…… 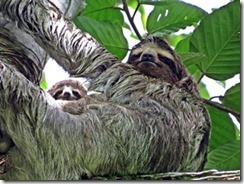 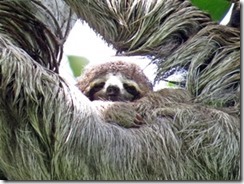 3 responses to “Is This the Rainforest?”