It it hard to believe that we have been living in Puerto Viejo for four years.  On Wednesday, August 13th we celebrated our arrival in 2010.   It is strange to me how time has gone so fast and so slow at the same time.  Life here is so laid back and calm – no one is in a rush.  For some who move down here, that is frustrating but for some reason I fell right into the lifestyle

The lack of stress is what is most wonderful – I can see why this little country is often #1 on the polls for the “Happiest country in the world”.

Since I last wrote we have had a few major things happening but by far the most exciting was that Costa Rica made it to the final eight in the World Cup.  Everyone was NUTS!!!

Everything in the country stopped when Costa Rica was playing and the President even gave time off to all of the workers.  There is just something about being in the middle of a crowd of people yelling and singing “Ole, Ole, Ticos, Ticos” that make life feel very good.

Puerto Viejo had its own celebrity, Dave Myrie, who was a bench player who ended up playing in the second to the last game.  There was a huge parade for him and then a welcome home party at Hot Rocks, one of the main bars in town.  He was so generous with his time giving photographs and posing with the fans.

We also went to the annual 4th of July party at The Point and met up with most of our friends, neighbors and dogs in our little corner of PV.  The Point always has a free barbeque for the neighborhood and there is always a band and fireworks at the end of the day.  It was just a great time!

Last but not least we have filed for permanent residency!!!  After you have lived here for three years you can apply and so we drove to Limon last week and got all the paperwork filed and paid the $100 per person.  Hopefully in three to six months, the application will be approved.  There will definitely be another celebration when it is

Iguana way up in a tree

Sofi with treasures from the beach 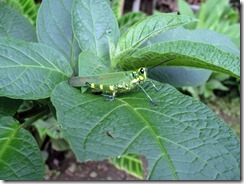 After a drought the rain came

Tom and crew coming back from the daily walk to the beach – these are happy puppies!!!

6 responses to “Four Years and Counting”