This was not like any Easter I have spent before……… 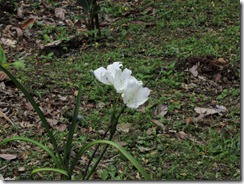 Easter is the most celebrated holiday in Costa Rica as well as all of Central America.  Many people have the entire week off but everyone has Thursday through Sunday off.  So – they all head to the beaches!!! 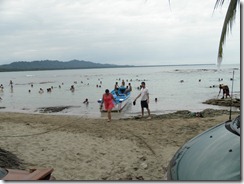 Wednesday afternoon, cars began pouring into Puerto Viejo and the buses were right behind them – standing room only.  For some it was a reason to drink all the alcohol they could possibly drink and still be standing (or not) but for most it was a family holiday.  Extended families played in the ocean and on the beach non-stop for four days and it was great fun to watch.

On Saturday night, Rene and Sarah were invited to play at one of our favorite restaurants – Stash’s ConFusion (formerly Loco  Natural).  Of course we went along (with Sofi as she is too young to leave behind)

and we all had a great time.  The entire staff, volunteer and paid, as well as the owners of the Jaguar Rescue Center came out to watch Rene and Sarah play the blues.  Sarah and Rene have been steady volunteers for six full months and everyone came out to show their support.  There was a lot of audience participation and I have to say it was clear that everyone enjoyed themselves immensely.  Especially Sofi!!!

Sunday, Tom took the dogs for a walk on the beach very early in the morning and came back and announced that it was a perfect day for snorkeling.  Sarah has volunteered to help me with an exercise program (she is a former trainer – how do I luck out!)  so after exercising, Tom, Sarah, Rene, and I headed out for a few hours of fun on the beach. 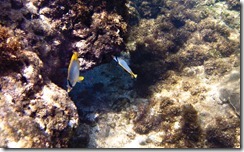 Sarah and I snorkeled while Tom,

Rene, and Sofi hung out talking and drinking a couple of beers.

Rene decided to see if Sofi would like the water so he took her down.

However, it clearly wasn’t her thing so back they came – both smiling.

There is just nothing in the world like the area when the water is still and the sun is shining.  Absolutely breathtaking.  We still don’t quite believe we actually live here sometimes.

Back home, Kaya and Wiley reunited with Sofi and they played

until they all were ready to crash.  Not before me however.  After such a great, long day, I fell asleep about twenty minutes into the moving we were watching and so went to bed.  This is my kind of life