How did we come to this decision? 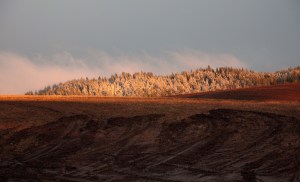 Looking outside across the wheat field from our rental house

I have thought a lot about how we ended up in the place we are – eagerly anticipating an early retirement to Costa Rica. So many random things happened to get us here. We moved to Moscow Idaho in 2006 so that I could take a job at the University and I really thought we would be here until I turned 65 even though in my entire career I have never stayed in one place more than six years. I was 52 when we moved so thinking that I could make it another 13 years in one place may have been a bit misguided. Tom was a freelance photographer when we lived in Colorado after leaving the corporate life and planned to continue that career once we got to Idaho. However, while the images of the Palouse (the geographic formation in northern Idaho – see photo above) are gorgeous, they are very different than the red rock country that he was used to and it was difficult to get a toehold here. Fortuitously, a job opened up in the sponsored research office at the university that Tom was perfect for and he went back to work in an area that he liked and with people he connected with immediately.

However, around the time he went to work, I was becoming very disillusioned with my own job for a variety of reasons. So, we began talking about what we really wanted to do with the rest of our lives and it quickly became apparent that we wanted to move to Costa Rica. We had made several trips down to this amazing country since 1999 and hated leaving every time. We had a trip planned for May of 2009 and so began looking at places that we might want to live. While we had never been to the Caribbean side of the country, the more we looked and read, the more we thought that that might be the place for us. We ended up staying the entire two weeks of our vacation there and bought a house. This side of the country still has the amazing charm and wildlife of the rest of the country but has a truly different vibe. Very laid back and comfortable for us. We were lucky enough to buy the house from a couple who said they could live there until we moved down and so we have had absolutely no worries there. They have bent over backwards to make sure that anything we want is done. When we went to stay in the house for the first time in February, we decided that we would buy the lot they owned behind our house and they have made that a very easy transaction. In addition, we were able to find a great lawyer in San Jose, an amazing realtor who doubles as an “everything we need will be done” man, and a person in San Jose who has managed to not only buy us a car but get us a cell phone. What more could we ask!!!