Ahhhhh – The Sound of Howler Monkeys in the Morning…….. 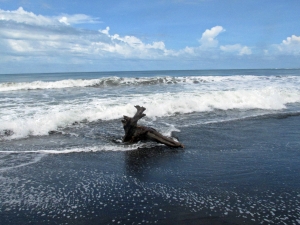 Morning on the beach

The last few days we have heard howler monkeys close by again. For several months we have only heard them way off in the distance. While I have to say that it is wonderful to know they are still near, it does mean that our days start much earlier than they used to. After the blue whale, the howler monkey is the loudest animal on earth and I believe it every morning at 4:00 a.m. 🙂

Daily life in Puerto Viejo has been going on as normal. We have met some new people and have had some fun times. A woman from Canada named Alicia came to town to scout out potential places to live when she and her husband retire in a few years. We spent a couple of wonderful evenings with her – one was my birthday where I had this amazing passion fruit cheesecake at Stashu’s for dessert.

At the end of October the annual Puerto Viejo Chocolate Festival was held.  There was a bit of a glitch that occurred because the proper permit had not been obtained to hold such a large event and the primary venue was shut down.  However the workshops and other special events went on and we were lucky enough to get tickets to the ‘Chocolate Pairing’.  Our friend Kimberly was in town so she, and our neighbors Ron and Don accompanied us to Chile Rojo where we got to sample pairings of delicious types of chocolate with different types of alcohol.  Not only did we taste wine and chocolate but beer, rum, and scotch as well.  Who would have thought that those combinations could be so yummy!!! 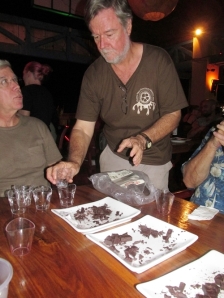 I have been spending a lot more time lately taking walks on the beach and into town.  For a while I was working too much and was spending too much time at home.  It has been so great to get back out again and really experience my wonderful chosen home 🙂

I have recently created a new blog just for birds called (surprise) Costa Rica Bird Lover (www.costaricabirdlover.com ).  While it is still a work in progress, I have added about 80 birds to the collection.  So if you want to take a look, feel free 🙂

Here are a few pictures from the last couple of months: 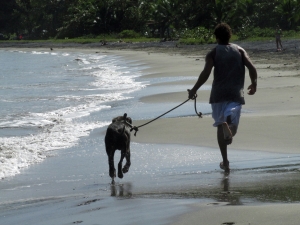 Neighbor with a new puppy

2 responses to “Ahhhhh – The Sound of Howler Monkeys in the Morning……..”