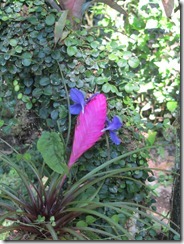 It probably seems a bit odd for me to be writing about setting in when we have now been living in Puerto Viejo for twenty one months.  But I think that it just takes longer to feel like you really are truly living here, and not just visiting,  than it takes moving from state to state in the U.S.  Obviously moving to a foreign country, especially a third world country, that is so much different than where you have been raised your entire life, is a huge step and it takes a while to assimilate.  At least for me.  But also, the locals here and the long time expats see people come and go so much that it takes some time for them to feel like someone like us is truly going to stay.  Many of the expats here come down for a few months and then head back to their home in the U.S. or Canada.  People we meet are often very surprised to learn that we do not have a home in the U.S. to go back to live in when we tire of it here (or when they think we will tire of it here

).  When we moved it was always our intention to make this our permanent home and now it really feels like it is.

That is not to say that I still don’t marvel at how beautiful it is or that I don’t run for the camera when I hear a new bird or see an animal.  I can’t imagine that I will ever become complacent about how much I love living here.  But there is no way I would mistake my life here as a vacation.  We have friends, have become involved in the community and have put down roots.  We have even done a lot of work on the house – some because we wanted something different and some because it was necessary.  And the work on the yard and garden will be ongoing forever ensuring that boredom will never be an issue

I have found that there are two types of expats living in Costa Rica.  Simplistically – there are those who moved here understanding that is not the U.S. and there are those that have moved down here thinking they could make it become the U.S. – or something close to it.  We are in the first category.  Those in the second category are unhappy with their choice but often have invested everything in moving here (as we did) and now are unable to get back because to do so they would have to sell everything for at least what they paid.  That is not easy to do here.  And many who have retired here would have to go back to work since it would be difficult to live on what we can here.  I do understand that life can be difficult here.  There are often long lines wherever you go – especially to transact government business – and theft is a huge issue.  There are some people who have been robbed multiple times.  For some reason, we have not had the negative experiences that many others have.  I will not be foolish and say that we never will, or that we occasionally don’t get frustrated with the bureaucracy but certainly no more than we did in the states.

So – it will be interesting to see what the next months and years bring.  I am looking forward to it!!

Kayaking in the ocean

Sisters walking on the beach

Everybody has a cell phone!!

Tassle and Odie watching the world go by

Parrots in the backyard