In mid December I went to read a book on my Kindle so I turned it on and the entire bottom part of the screen was dark.  I could read but not very easily.  I am a voracious reader and the Kindle has been a life saver for me in that regard.  There just aren’t many books here in Puerto Viejo and to order from the states is cost prohibitive for me.

The Kindle was not quite a year old so I got on Magic Jack and called Amazon to see if they had a solution.  After going through all the options on their end (none of them worked) the wonderful customer service agent said that I could send it back for a replacement and would be reimbursed for shipping.  I had a month to complete the return.  The replacement was sent to my son’s house in Colorado two days later and he sent it on to friends who were returning to CR in January.  I was thrilled!!

The agent said that I would get email instructions on how to send it back and in just seconds after I hung up, there they were.  the only issue that I could see was that they required the package to be tracked and the postal service here does not do that.

I found out that there is a DHL office in Limon – about an hour or so away – so one morning, Tom took off to Limon to send back the non-working Kindle.  About 11:30 a.m. I got a call from Tom saying that the cost of the return was going to be $92.00 as the only option for tracking was three day delivery.  We decided not to send the package since you can now buy the Kindle I have for $79.00 and I didn’t want to risk not getting the reimbursement for shipping.  However, I got online and “chatted” with the Kindle customer service representative and was assured that the total cost of shipping would be reimbursed – even though it was more than a new Kindle would be worth!!  I called Tom but he was already on his way back, and, since everything in Costa Rica closes down for an hour and a half for lunch and it was now noon, he decided to try another day.

We headed back to Limon a couple of weeks later and sent the old Kindle on it’s way to Amazon.  We had a couple of issues that came up – one being that they didn’t know that it had arrived and my account was not credited for the shipping.  However, a quick phone call was all it took to give them the tracking number and we were done.  I am now happily reading away on my new device.  Pura Vida!!!

Photos from our trip to Limon: 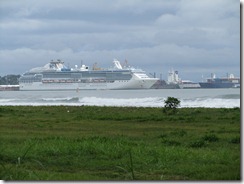 The cemetery in Limon

A tire and brake shop

Warning for big hole in the middle of the bridge