This was the second birthday I have had here in my new home and it got me thinking about all the things that we will be celebrating for the second time now that we have celebrated our one year anniversary of the move.  Tom’s birthday is coming up next and then all the holidays.  We also are once again watching the fall migration of all the birds from North America and it is wonderful.  We have birds all year long but the fall and spring migrations are just spectacular!  Our garden is also just going crazy with new blooms and plants all over.  Again – it is like this most of the year but right now is particularly abundant.

Anyway, on Independence Day we went to the parade that they have every year in downtown Puerto Viejo and it was fun.

Since the town is only a few streets long, the kids in the parade marched with their instruments up and down the streets for a couple of hours holding flags and dancing.  There were not floats or anything – just the music and the kids and it was great!!  At the school in town the students had made

T-Shirts for the event and they were hanging from the rafters of the school – pretty amazing work! 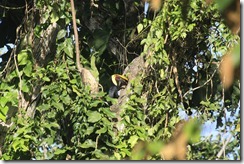